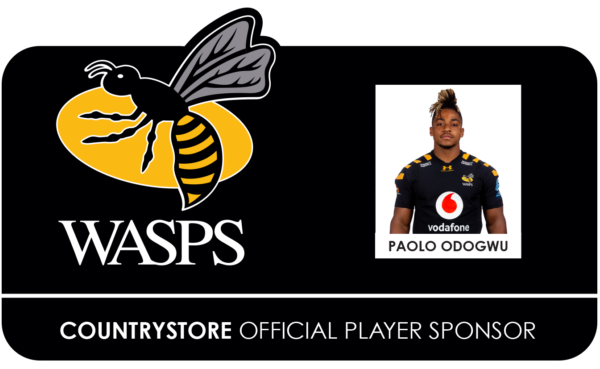 Countrystore are pleased to sponsor Wasps player Paolo Odogwu for the 2019/20 season!

Wasps welcome him back to his hometown of Coventry, as the rapid winger joined the Club ahead of the 2019/20 season.

Odogwu, who made the move from Sale Sharks, strengthened Wasps’ options on the flanks heading into the 2019/20 campaign.

In 2016, the explosive back ran in eight tries in just three Premiership Sevens group matches for Sale to top Christian Wade’s try-scoring record in the competition.

During his first season in Manchester, he impressed across both the Premiership and Heineken Champions Cup, and went on to score seven tries in 29 first-team appearances for the Sharks.

He previously spent time with Leicester Tigers while also having represented England Under 20s.

His first outing in a Wasps jersey was at the 2019 Premiership 7s where he helped his side reach the final for the sixth successive time, contributing six tries and in the process becoming the competition's top try-scorer of all time.

Are you a sports team based in Cookham, looking for sponsorship? If so, get in touch with us at: admin@cstore.co.uk